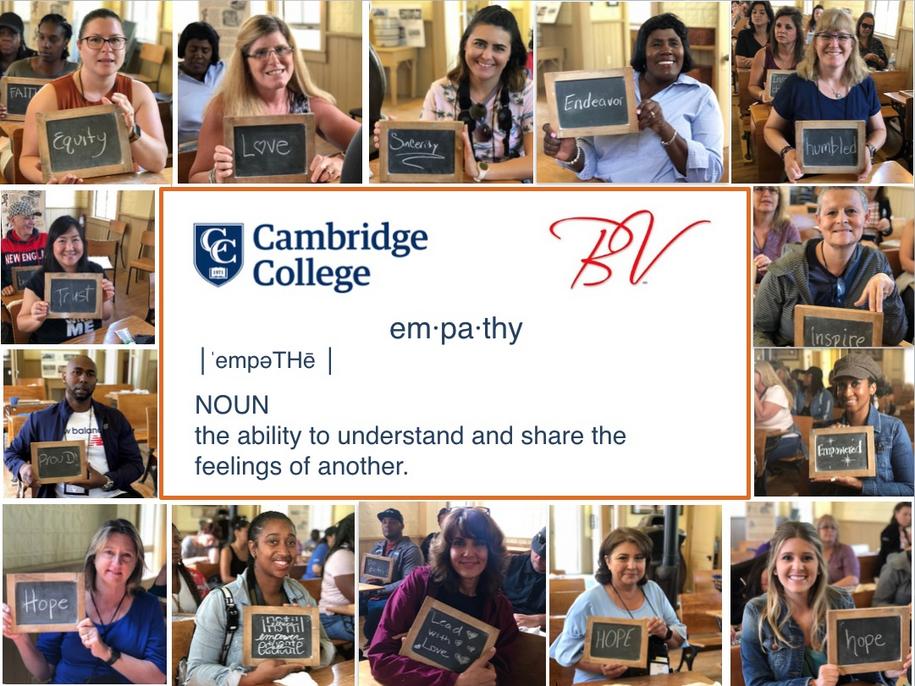 Learn about the unique opportunity offered to educators and past participants of Footsteps to Freedom Underground Railroad Study tour. Earn 16 graduate credits as we dive deep in the studies of the heroics of Freedom Movements including the Underground Railroad (completed in only 3 terms).

A sample of the Certificate outcomes:
Explain and analyze the Underground Railroad as a key historical event
Understand and evaluate the diversity of the human experience as influenced by religion, race, culture, and politics in US history

About the Foundation:
The Black Voice Foundation was founded in 1988 with a mission to train and educate individuals in print media. With the digital revolution, the rapid growth of technology in the world of communications and media, and the need to impact lives through a diverse set of multi media platforms; the foundation has expanded its mission to include a new set of projects in the area of education, professional development, history, and the arts. The Black Voice Foundation has hosted over 2500 educators on the Footsteps to Freedom tour where they have walked the steps of freedom seekers from the 1800s for more than 22 years.  This experience allows you to look at empathy through the eyes of the historic journey of the Underground Railroad.

Footsteps to You: Chattel Slavery. The exhibit showcases a collection of original documents and artifacts that were bequeathed to Black Voice Foundation by the estate of  historian Jerry Gore.

The Gore family were formerly  enslaved Africans in Maysville, Kentucky where Jerry lived until his passing.  Visitors are challenged to ask themselves, In 100 years, what would you want history to say about the choices you made on todays issues.

Learners in this will gain knowledge and expertise of the Underground Railroad freedom movement as well as the concept of empathy as a necessary tool for parents, students, educators and community leaders.  This tour provides the historical background, key studies and analysis of race, politics, culture, and engagement, to equip teachers with the perspective and tools to develop new resources for their context. The tour includes an immersion experience and time with experts to develop new educational models for positive social change in their context.

The Gore Collection allows visitors to build and experience the same historical empathy by immersing them in a world where people were considered objects - a prejudice that was entirely based on the color of one's skin. Visitors will learn that these injustices not only affected those who were actively oppressed, but that slavery's lingering effects have haunted people even decades after it was abolished. Visitors are challenged to ask themselves "What side of history would I have been on?"

Jerry Gore’s lifelong goal was to expose the horrors of slavery so that visitors to his hometown of Maysville, Kentucky could appreciate the daily perils experienced by enslaved people as well as the strength it required to fight for their freedom. This exhibit presents the unique artifacts collected by Gore in his effort to build historical empathy, a means of achieving a deeper understanding of the lived experiences of people from the past. First-person accounts, newspaper articles, and original objects of the slave trade serve to put the viewer in the shoes of those that were subjected to this treatment.

“Footsteps to You immerses the visitor in a world where people were considered objects – a prejudice that was entirely based on the color of one’s skin. Visitors will learn that these injustices not only affected those who were actively oppressed, but that slavery’s lingering effects have haunted people even decades after it was abolished. Visitors are challenged to ask themselves ‘What side of history would I have been on?’”

Too often the study of history occurs from the perspective of looking at dates and manipulated facts. This program utilizes an empathy pedagogy that focuses on constant teacher-student interaction, attentive listening and interchange of roles. In this context, we will apply empathy and storytelling as a means of analyzing the Underground Railroad from it's historical sense. At the conclusion of this program, students will be equipped to incorporate the content from this program and Empathy techniques into their classroom and develop new educational models for social change.

An Empathy pedagogy includes understanding the students' perspectives and giving value to their experiences. When the channels of communication are open and teachers get into their students' shoes, material relevant to the students' experiences is present at the second stage, while students are encouraged to question the prevailing status quo and to raise their voices in institutional contexts in which they have traditionally been silenced. Finally, during the third stage, students disseminate self-gained knowledge and thoughts with a view to creating a better future and a different society, as part of the broader mission of informed, democratic, critical, empathetic and active citizens.

Upon completing the Empathy graduate certificate program, students will be able to:

Explain and analyze the Underground Railroad as a key historical event
Understand and evaluate the diversity of the human experience as influenced by religion, race, culture, and politics in US history
Apply historical processes that shape individuals and communities, drawing on detailed knowledge about the historyy of the area under study
Think critically about the complexity of experiences found in the historical record of the United States during the Underground Railroad, and utilize Empathy to explore diversity as a critical component of history
Distinguish between primary and secondary sources, and understand how each are used to make historical arguments
Assess, use, and synthesize different kinds of evidence from a variety of historical sources to make a coherent argument about the past
Effectively conduct research and write a coherent historical essay or research paper that articulates a clear arguent, effectively interprets multiple forms of evidence, identifies arguments in secondary historical texts, and uses appropriate citations.
Understand teh difference between opinions and substantiated scholarly claims
Produce new works to be used within the classroom setting
Utilize storytelling in a classroom setting